When the call came in from Carla at Sunny Coast Vet  ( a mobile Veterinary service)  http://www.sunnycoastvet.com/

my heart broke as she explained that she wanted to have professional photos taken of her Grand Prix Champion horse ” Georgie” before she had to euthanize him due to leg injuries. It has long been a passion and connection that I have had with horses and to get the opportunity to merge my two passions together was bitter sweet.

I will let Carla tell you in her own words about this special horse. 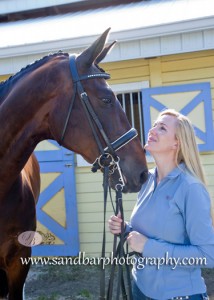 “I appreciate you guys coming out to photograph Georgie before I had to say goodbye to him. And absolutely, you can write about us in your blog. Here’s a little write-up about him:
Georgie was born in 1996 in Denmark and was brought to the US when he was 9 years old. My trainer Linda Oliver bought him and trained him from 2nd level to Grand Prix. I bought him a year ago. He was the kindest, sweetest, most gentle horse I have ever had the pleasure of knowing. Our road began somewhat rocky, with me as his veterinarian and him as my unwitting patient, but it ended with the most enjoyable year I have ever experienced with a horse. Georgie was an amazing teacher who was always there to do things incorrectly when I asked for them incorrectly, but to do them with a grace and finesse that belied his large frame when I rode well. He took care of me and was always willing to go the extra mile when called upon. He is the only horse I have ever known who could both piaffe and pee-pee in a bucket on command. He would have worked enthusiastically into his 30s if he could have. However, in May, he became lame due to a problem in his hoof. A couple of weeks later, due to the fact that he wasn’t putting normal weight on his foot, he catastrophically injured his stifle. Georgie was more stoic than any horse I have ever worked on, and he tried to rally during the last few weeks of his life. However, he couldn’t bear much weight on his leg, even while he was on heavy pain killers. Because it was not possible for his injury to ever heal to a point that Georgie would be reasonably comfortable, it was decided to do the only fair thing for Georgie and let him go. He will be missed by all who knew him. Farewell, Georgie-P/Georgia Peach/Pumpkin/Button-headed man.” 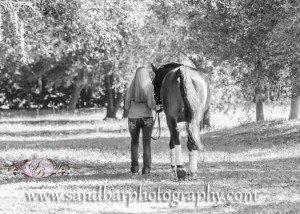